28-March 4, 2015 Seoul, Korea Approximately 150 leaders from around the world gathered in Seoul, Korea, from February 28 to March 4, 2015, to discuss multidimensional solutions to present-day crises and global conflicts at a UPF International Leadership Conference entitled “Beyond the Challenges of Our Time: Transforming the Society, Nation and World.” The guests were welcomed at the Opening Banquet with an Invocation by Rev. Dr. Johannes Mazibuko of the Alliance Church of Swaziland. This was followed by Opening Remarks by Dr. Byung Ho Son, chairman of UPF-Korea, who spoke on the tense situation between North and South Korea and UPF’s efforts to support the reunification of the Korean Peninsula, and Dr. Thomas G. Walsh, president, UPF International, who informed participants of UPF’s objectives in holding the conference.

Hon. Yoshinori Ohno, Japan’s former minister of defense, deliberated on the growing instances of violence in Syria, Iraq and throughout the world, and affirmed his commitment to oppose war and conflict. Mr. Adama Doumbia represented Mrs. Kathy Rigney, regional chair of UPF-Africa, in reporting on UPF-Nigeria’s successful partnering with government agencies in their work for unification and peace in Nigeria and in offering technical assistance on marriage and family.

In the Opening Plenary, UPF Chairman Charles Yang introduced the background of UPF and its founder, Dr. Sun Myung Moon. Against the backdrop of the miserable history of the Korean War in the 1950s, Dr. Moon began a movement of spiritual awakening in South Korea after being liberated from a North Korean prison camp, and went on to initiate the global organization of UPF with great impact around the world. Dr. Vladimir Petrovskiy, senior adviser to UPF-Russia, reflected on the new chapter of history that we are facing, and UPF’s ability to build a new, common vision to promote peace and family for nation-building. He spoke about the difficulties in finding this common goal in Russia, in particular among his Russian and Ukrainian colleagues.

In the Opening Plenary, UPF Chairman Charles Yang introduced the background of UPF and its founder, Dr. Sun Myung Moon. Against the backdrop of the miserable history of the Korean War in the 1950s, Dr. Moon began a movement of spiritual awakening in South Korea after being liberated from a North Korean prison camp, and went on to initiate the global organization of UPF with great impact around the world.

Dr. Vladimir Petrovskiy, senior adviser to UPF-Russia, reflected on the new chapter of history that we are facing, and UPF’s ability to build a new, common vision to pAs a highlight of the conference, UPF Co-Founder Dr. Hak Ja Han Moon gave the Keynote Speech, delivered by her daughter, Dr. Sun Jin Moon. Most importantly, Dr. Hak

romote peace and family for nation-building. He spoke about the difficulties in finding this common goal in Russia, in particular among his Russian and Ukrainian colleagues.

Hon. Dr. Myrna Romarate, national president of the Provincial Board Member League of the Philippines, reflected on the fact that, hidden in deep recesses of the human mind, attachment to power, prestige, and material possessions create divisions. She saw a solution to this dilemma through personal transformation of a life of prayer and living for one dream, one goal and one path. Hon. Ek Nath Dhakal, former Cabinet minister of Nepal, called upon governments, civil society and the private sector to work together to build peace by respecting human rights, economic laws and human development, and family values. 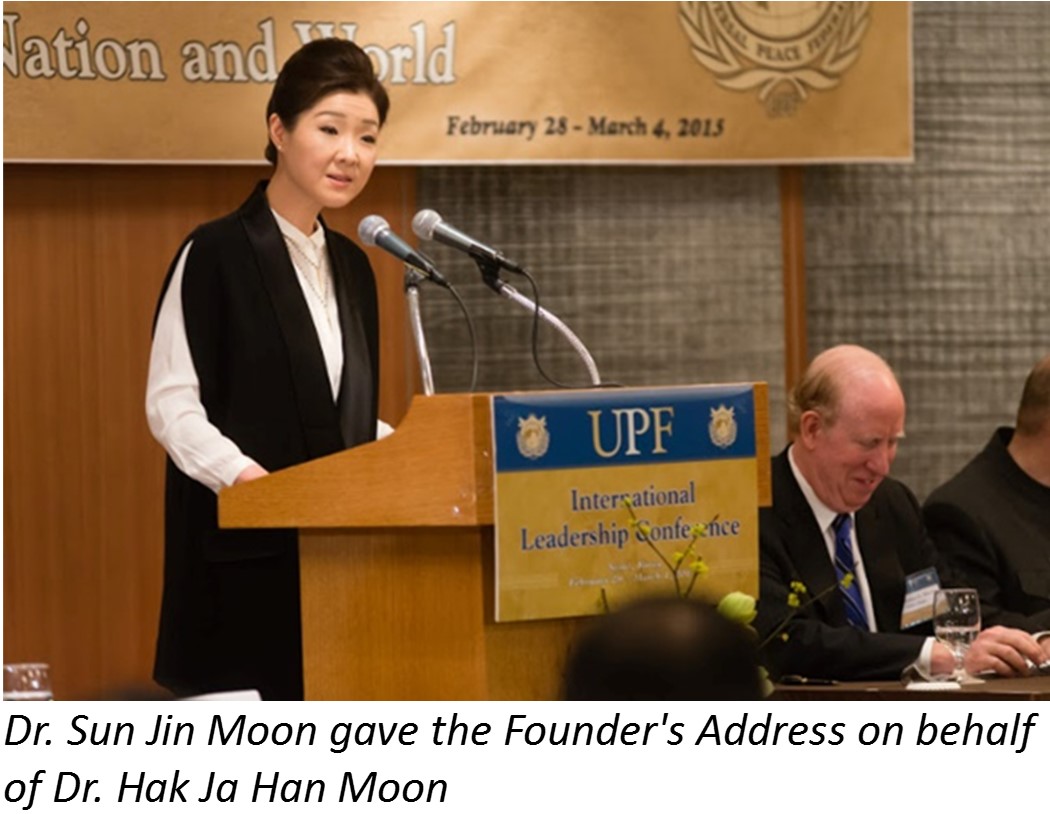 Ja Han Moon spoke about the great awakening that is taking place in the world, despite the unstable and tragic events that are unfolding daily, and she assured the audience that despite these problems, the guiding hand of God is at work to weave together a great civilization for one universal family. The UPF co-founder encouraged everyone in the audience to become a true parent, true owner and true teacher in taking God’s viewpoint toward all people and all things, and working to build an ideal nation.

The subsequent sessions presented an overview of the principles of Dr. Sun Myung Moon, followed by reflections of selected commentators. Moderated by Mrs. Tomiko Duggan, UPF director of public affairs in Washington, D.C., the second session illuminated the “Founders’ Vision: Principles of Peace.” Mr. Jacques Marion, president of UPF-France, summarized the UPF founders’ spiritual and moral vision, based on the fundamental core values, principles and teachings of the Unification philosophy. 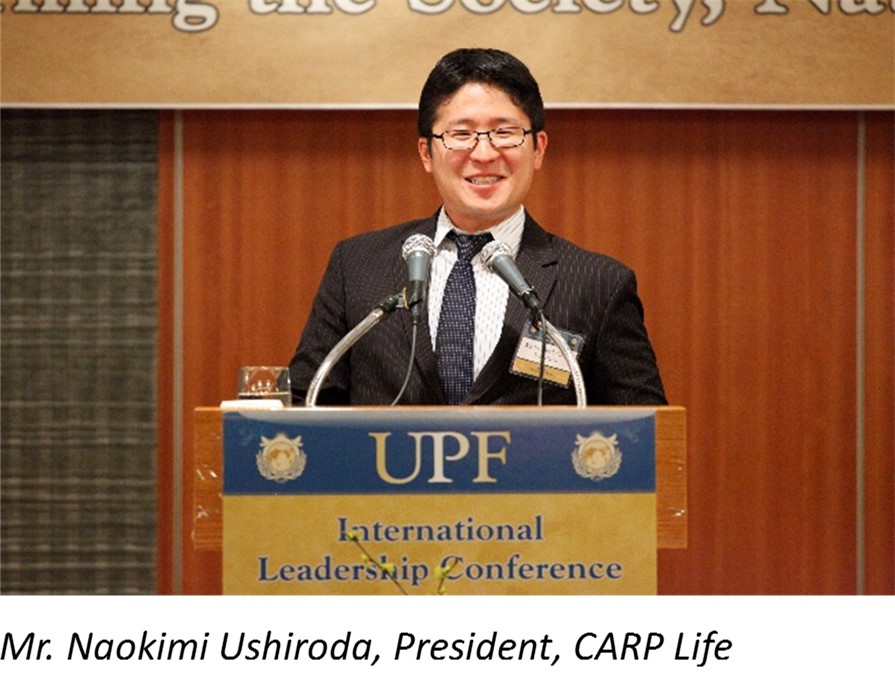 Dr. Michael Balcomb, president of the Family Federation for World Peace and Unification in the United States, reflected on the founders’ principles and compared them to an X-ray that diagnoses the human spirit and shows us what needs to be fixed. Professor Masahisa Hayashi, professor emeritus of Waseda University in Japan, spoke about overcoming self-interest and practicing the founders’ principle of true love and living for the sake of others. Mr. Naokimi Ushiroda, president of CARP (Collegiate Association for the Research of Principles) in the United States, reflected about God as a parental figure who yearns to live in a world of happiness and peace, but said that world can only come about through each of us.

A session on “Overcoming the Challenges Facing the Family,” was moderated by Mrs. Eugenia Kagawa of the Executive Office of UPF. Mr. Ricardo de Sena, president of UPF in the United States, spoke about the importance of the family as a foundation for transforming the society, nation and world and UPF’s worldwide work of strengthening marriage and families. Mr. Joseph Champagne, former mayor of Toms River in New Jersey, U.S.A., explained the significance of the human family and the breaking down of barriers through God’s words. Mr. Kazu Matsui, former chairman of the Educational Board in Saitama Prefecture, Japan, explained how raising children cultivates the “good” in people and reminds us of our true selves and our need to create bonds and become one in heart. It is also a critical component in maintaining the morality and order in a society.

“Overcoming the Challenges Facing Religions and Governments” was the theme of a session moderated by Dr. Tageldin Hamad, secretary general of UPF International. In his presentation, Dr. Thomas G. Walsh, president of UPF International, discussed the problems facing governments and religions today, and the possible solutions and action steps that can be taken. Hon. Erna Hennicot-Schoepges, former president of the Parliament in Luxembourg, spoke about the role of nation-states and religion. In Europe, she advocated the importance of making the Charter of Fundamental Rights and Freedoms a universal agreement.

Mr. Quan Yi Zhang, professor at Zhejiang Wanli University in China, proposed a new world system in which governments and religions coexist to bring about good national and global governance. He highlighted UPF as a key organization in reconciling differences and bringing the world together under the flag of “One Family under God.” Mr. Jaap Willem de Zwaan, professor at Erasmus University in the Netherlands, spoke about the European Union as a model for regional cooperation and its goal of promoting democracy, rule of law, and successful market economies in other Eastern and Southern areas. Rev. Shuei Kobayashi, chief priest of the Chuzenji Buddhist Temple in Japan, spoke about the plight of Tibetan monks under communism in China, where the practice of Buddhism was not allowed. He concluded that religious freedom is important and governments should not block the practice of faith. Dr. Lek Thaveetermsakul, vice chair of UPF-Asia, spoke about the peace initiatives in Thailand for the past few years, including the Interreligious Council for Peace, peace and family education, peace seminar tours and peace messages and various forums and conferences.

There were two breakout sessions in which participants divided into six groups to discuss the significance of the family and the ways in which to address and overcome contemporary threats and challenges to the family as well as the challenges facing both religions and governments, and the ways in which to overcome those challenges to the stability of the nation and the integrity of religion. Following that, rapporteurs from each group reported on the major points made in the discussion.

A session on “One Family under God: The Blessing Vision,” was moderated by Mr. Tuo Huan Chen, secretary general of UPF-Chinese Region. The content of this session centered on the personal stories of what it is like to have an intercultural and international marriage and family, and the challenges and joys that come with it. The speakers were Mrs. Eugenia Kagawa of the Executive Office of UPF International, Dr. Tageldin Hamad, secretary general of UPF International, and Mr. Ricardo de Sena, president of UPF-U.S.A.

UPF, The Washington Times and Segye Ilbo co-sponsored a panel discussion about the issues concerning the Korean Peninsula, with high-level participants from the media agencies in Korea and the United States, as well as political leaders, academics and NGO representatives.

On March 3, the last day of the conference, the participants were invited to the Commemorative “Foundation Day” Celebration and Blessing Program, which took place at the Cheon Shim Stadium, at a location east of Seoul, where 30,000 Korean, Japanese and international guests listened to a Keynote Message from Dr. Hak Ja Han Moon, urging all present to practice true love despite the destructive forces rampant in the world due to religious, racial and social barriers that are heaping tragedy on the human family. After her speech, Dr. Moon officiated at the blessing of 2,800 newly-wed couples present, many of whom were multi-cultural, multi-religious and multi-racial. Afterwards, Dr. Moon hosted a luncheon for 500 distinguished guests, including the participants of the World Media Conference and the International Leadership Conference. 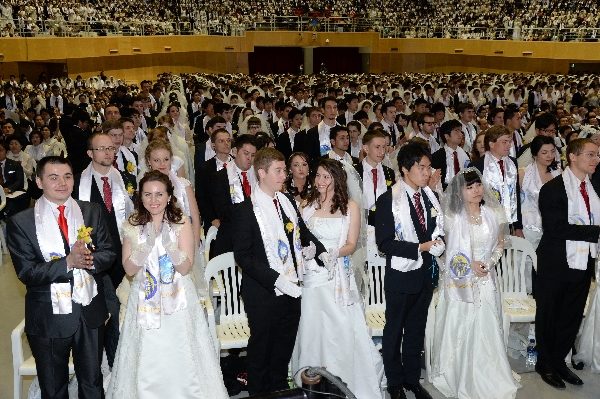 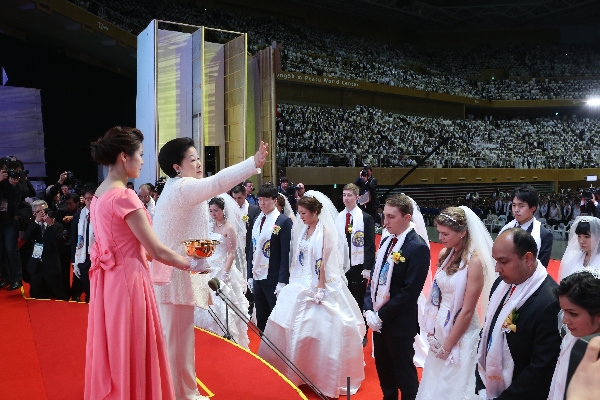 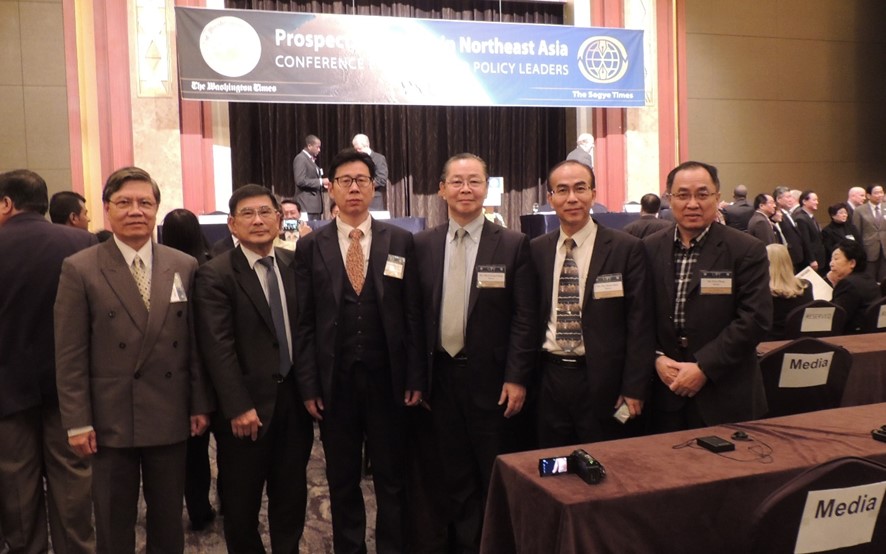